We can fine-tune your car 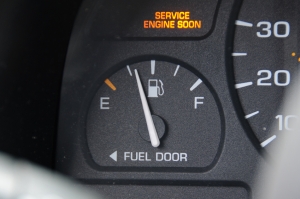 Today’s new engines are more sophisticated that ever. When working properly they deliver a level of performance that we never before experienced. But it also means today’s engines have more things to go wrong. Monitoring all the sophisticated aspects of modern engines is your vehicle’s ECM, the Engine Control Module, often referred to as your car’s on-board computer. When something goes wrong in your car’s engine the ECM picks up on the problem and activates the Service Engine light–keeping it on till the problem is fixed. Since most of us have no idea what’s actually wrong with our engine, that Service Engine light can easily put a scare into any driver.

If your Service Engine light comes on, bring your vehicle to Buchanan’s Service Centers at your earliest convenience. Your engine’s computer knows what’s wrong and will tell us by code with the right equipment. Buchanan’s has an ECM code reader that plugs into your car. We can cross reference the code number to any vehicle manufacturer and model. When the code is revealed, Buchanan’s Service can quickly identify and solve your engine’s problem.

Probable causes that your ECM detects include failures with your engine’s:

Your ECM is continuously gathering information from sensors placed throughout your vehicle’s engine. Sometimes when a problem is detected the cause may actually be a faulty sensor. Buchanan’s Service will test the sensor to see if it is faulty, then either clean or replace that sensor.

If your Service Engine light begins blinking then the engine problem is quite serious. The blinking light is often accompanied with a rough running engine, particularly in idle. A blinking Service Engine light means you need to immediately get your car in for service. Likely the blinking light indicates that your catalytic converter is failing. Running the car much longer can cause further damage to the converter. If close by, get your car into either Buchanan’s Service location. Best advice is to pull in the nearest parking lot, shut off your vehicle and call Buchanan’s for a tow. The cost of the tow (which may be covered anyway by your auto insurance) is far, far less compared to the costly repair of the ailing engine running much longer.